This study examines the impact of expansion in non-oil sector on sustainable economic growth of Nigeria economy. The study sourced data from the Central bank of Nigeria (CBN) statistical bulletin covering the periods of 2000 – 2019. An economic growth model was formulated using the study variables and the model was estimated using vector auto-regression  (VAR) techniques, other diagnostic tests such as  Roots of Characteristic Polynomial for VAR model stability, Augmented Dickey-Fuller test for time series stationarity, and granger causality tests were conducted to ensure the reliability of the model estimates. The analysis revealed that the estimated model is stable while the VAR and variance decomposition results shows that real gross domestic product is strongly endogenous in the short run but weakly endogenous in the long run. Further findings suggest that in the long run non-oil sector is strongly endogenous to real gross domestic product (92% contribution). The study, therefore, recommends diversification of the Nigerian economy by focusing more attention on agriculture, solid minerals, and service sectors as they tend to influence economic growth in the long run. More so, improved frameworks of accounting in areas of non-oil revenues are desirable for the accountancy profession. 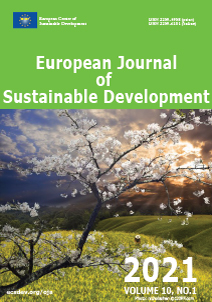